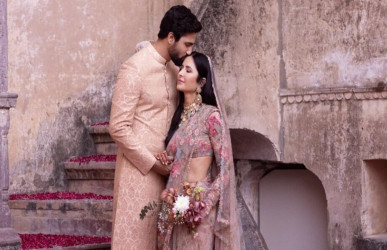 How Bollywood Has Inspired the Indian Bride and Latest Wedding Trends

From Madhuri Dixit in “Hum Aapke Hain Kaun” to Aishwarya Rai in “Jodha Akbar”, Bollywood has shaped designer trends and modern Indian bridal trends. Designer gowns, magnificent heritage gems, and a multitude of noteworthy trends - all crammed into 5 minutes of screen time - is enough to have any fashion enthusiasts daydreaming about her wedding look.

The magnificence of Bollywood has pioneered what designs become the go-to designs of the wedding season over the decades. Let The Desi Bride take you through the evolution of Indian bridal wear and the influence of Bollywood into current modern Indian wedding trends.

The Evolution of Indian Bridal Wear through the Decades

The lovely light blue and red outfit was worn by Madhubala in the song Jab Pyar Kiya Toh Darna Kya and is arguably one of the most famous of all the ensembles from Mughal-E-Azam. The unusual design of this dazzlingly adorned dress is a fitted form till the waist with an umbrella-shaped bottom half. Since it was her character who popularized this kind of salwar kameez, it is now known as the Anarkali. The Anarkali salwar kameez was worn several times during the film, but it was Madhubala's beautiful outfit that became famous. This type of salwar kameez has been universally admired in the years after the film's first premiere. An exquisite haath phool in the Mughal-E-Azam style is a timeless piece of jewelry that is still used in weddings today. Inspired by Pakeezah (1972) and Mughal-e-Azam, layered jewelry and shararas became the favorites of the Indian bride of the decade. 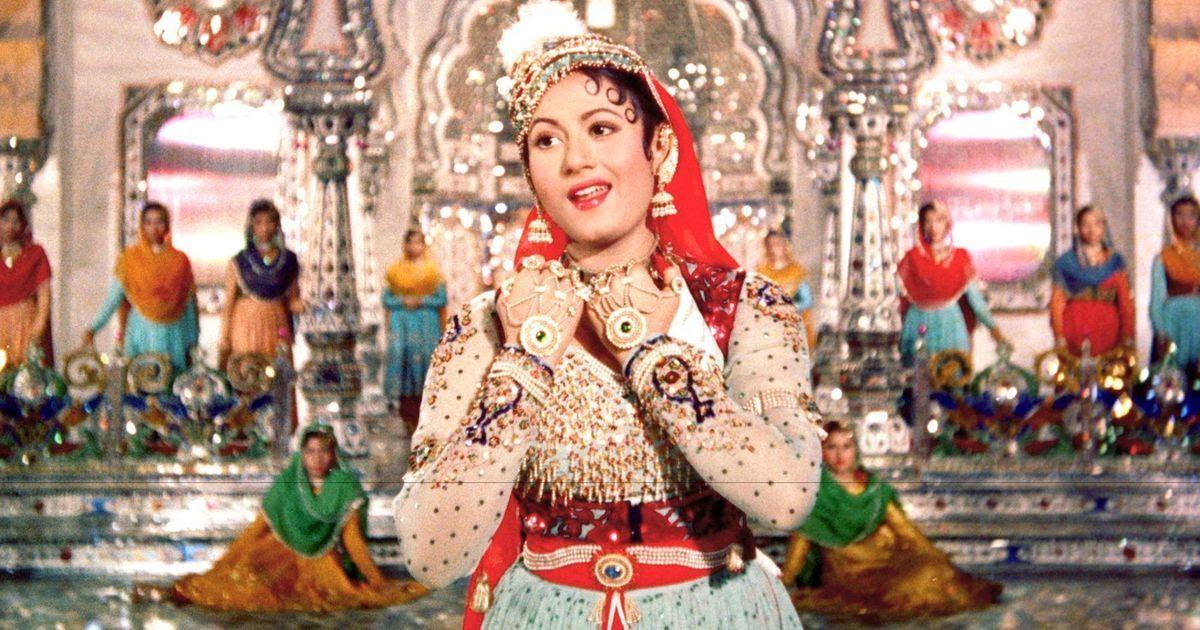 In the film Umrao Jaan, Rekha wore 1960s-style anarkalis inspired by the film Mughal-e-Azam. This metallic gold Anarkali looks stunning with the matching net dupatta and gold jewelry, and the glossy red lips provide a pop of color to the stunning ensemble! The ‘80s are reminiscent of Sri Devi and a brighter color palette. The Indian bridal fashion scene saw popularity in gota-patti, gossamer sarees paired with sleeveless blouses and blingy ornaments. The over-the-top gold jewelry also became popular again in the late 1990s.In the ’90s, it became more common to see brides wearing a jhumar, also known as a Passa or a side-tikka, during Muslim and Sikh marriages. While its origins can be traced back to India's Mughal Empire, it is a trending piece of jewelry today. 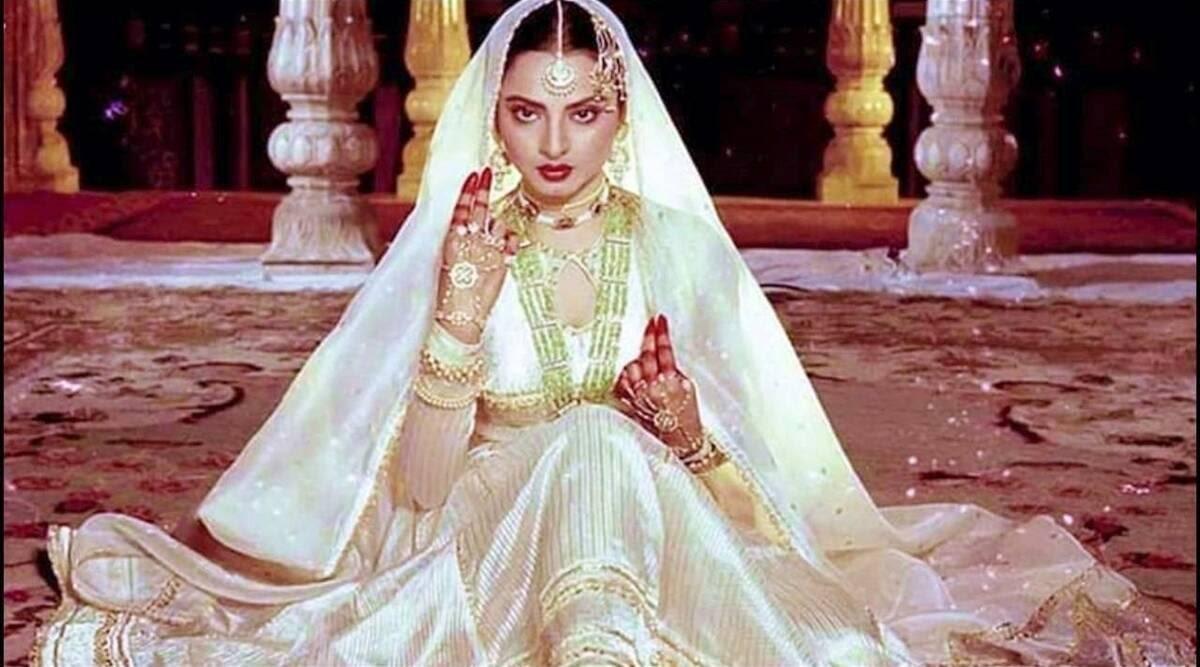 Kajol's bridal lehenga remains one of the most famous wedding gowns of all time. The ensemble, which was created by Manish Malhotra in the early stages of his career, is still relevant today since the kurta-lehenga combination is making a resurgence. The gold embroidery complements the monotonous beige suit, which was influenced by the OTT styles of the 1990s and is definitely what makes it a classic. This was one of those trend-setting occasions when the bride eschewed the traditional crimson lehenga. 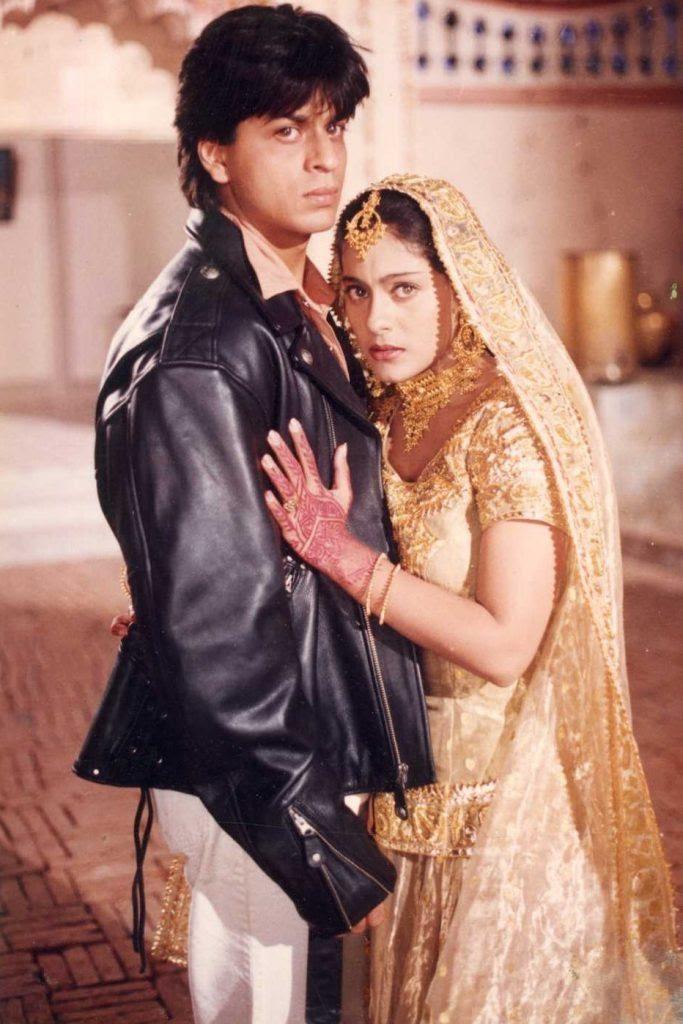 In the iconic song, "Didi Tera Devar Deewana", Madhuri Dixit looked stunning in a jewel-studded purple satin sari with floral decorations while performing the song. However, it wasn't only the saree that drew attention. Along with the famous saree, the actress donned an intriguing backless blouse with full sleeves. Madhuri Dixit's outfit became a benchmark for numerous Indian wedding occasions, from the unusual color (not the customary red, yellow, or green), to the fine detail, to the somewhat traditional yet rather daring blouse for a family event, to the jewelry. 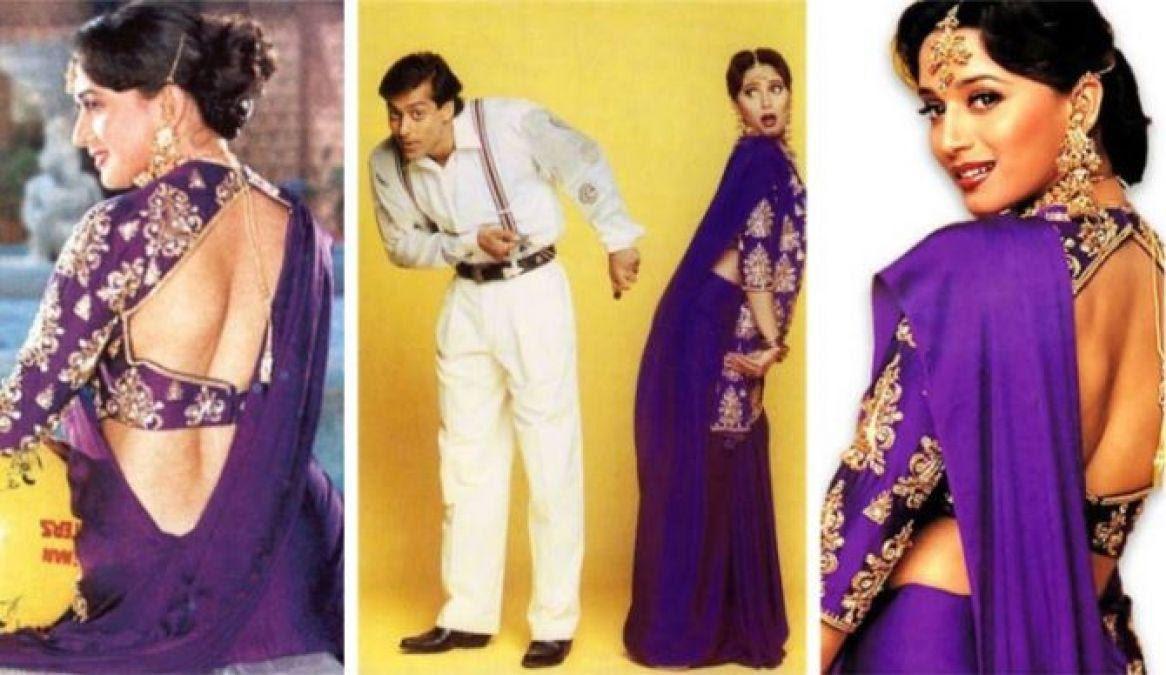 Deepika Padukone may have worn white to key wedding ceremonies, but we can say with absolute certainty that it wasn't until after “Veer Zaara'' that the color was ever regarded as a wedding choice. Manish Malhotra, the Bollywood favorite, chose opulent ensembles to complete Zaara's look. Though Zaara's first wedding outfit was customary red, the purple and white gharara set with beautiful embroidery for the legendary Veer-Zaara wedding had everyone picking unique colors for their own big day. The coordinating maang-tikka, necklace, and purple bangles not to mention the nose-ring, became all the vogue after this film. 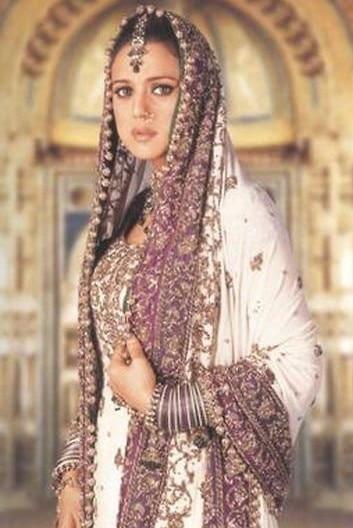 One cannot talk of weddings and miss the outfits worn by Aishwarya Rai Bachhan in “Jodha-Akbar”. A palette of spectacular aesthetics was shown in the film based on the Mughal-Rajput cultural fusion. They were not only extraordinary but also unmistakably iconic. In her crimson lehenga ensemble, Neeta Lulla nailed the complexity and exuberance demanded of a future Mughal queen, inspiring dozens of new brides and continuing to do so. Aishwarya’s lehengas were genuinely regal with ornate jewelry. This regal jewelry fashion, which was laden with traditional Kundan stones, rubies, and pearls, became a mainstay for many brides. It wouldn't be incorrect to argue that Aishwarya Rai's ethereal-looking outfit inspired the millennial brides' infatuation with chokers. 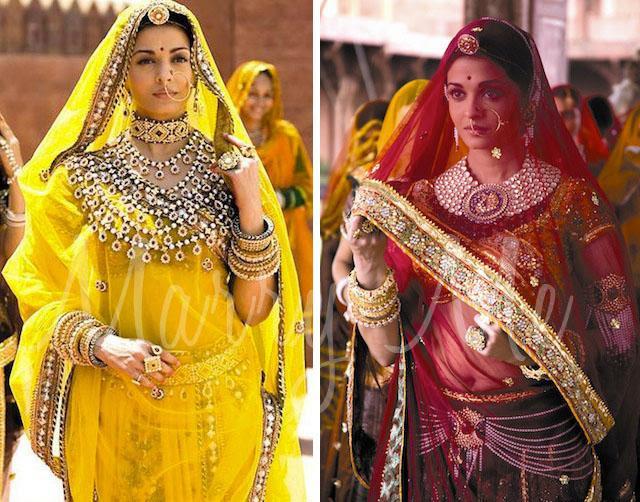 From high-waisted palazzo trousers to off-shoulder blouses and handloom sarees, fashion in this digital era is all about bringing out the bride's personality and reviving India's textile heritage.

“Rockstar” (2011) was the first Bollywood movie to show a Kashmiri pandit wedding, with Nargis Fakhri looking gorgeous in red and donning stunning Kundan jewelry. Costume designers Aki Narula and Manish Malhotra, made certain that it was memorable, and with pandit pheran, dejhor (ear jewelry), and taranga, they nailed the details. 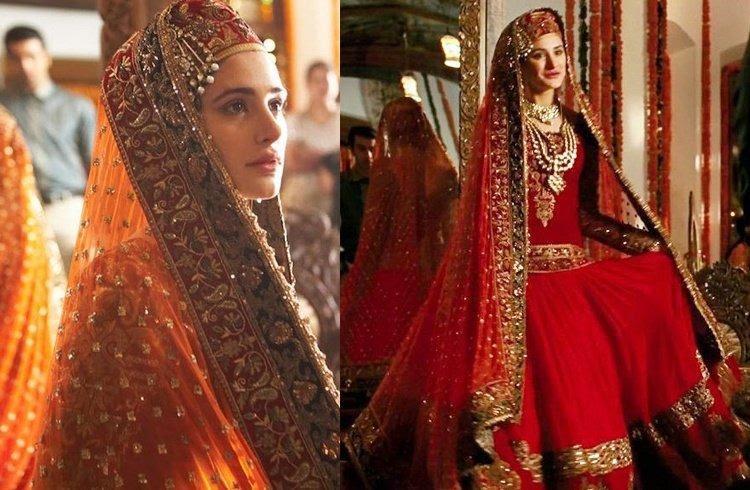 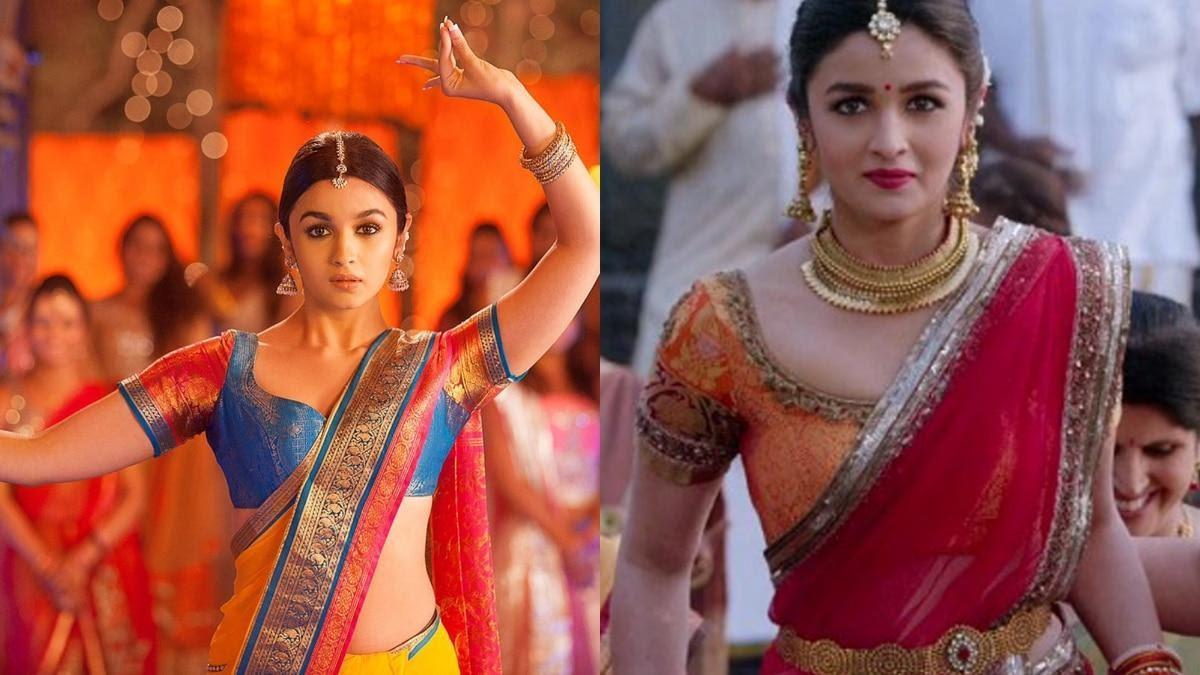 Anushka Sharma in “Ae Dil Hai Mushkil” (2016) induced a gasp from the audience as she appeared in this beautiful Manish Malhotra nikah sharara. The monster that is the Kundan neck ornament, and, of course, that passa, must be included when discussing everything that made the appearance iconic. 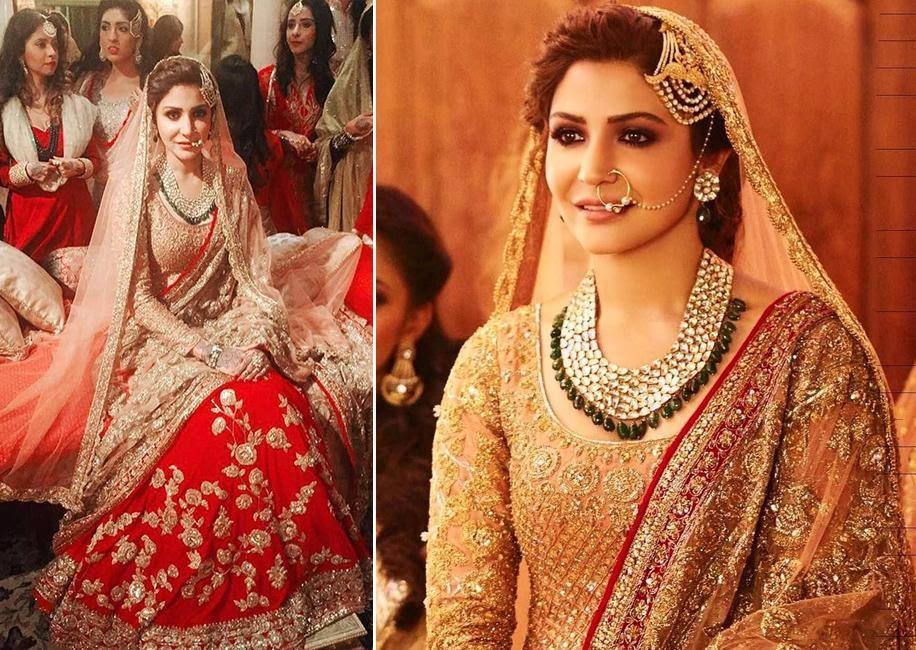 Deepika Padukone's gold lehenga outfit, which she wore in the song "Deewani Mastani," (Bajirao Mastani) combines many elements: a backless, Anarkali-style top, a tiered skirt with brocade lining, and palazzo trousers below it all. The tiered skirt is decorated with a strong gota patti border in the same molten yellow color as the full-sleeved top, which has a sheer bottom embroidered with floral needlework and rhinestones. 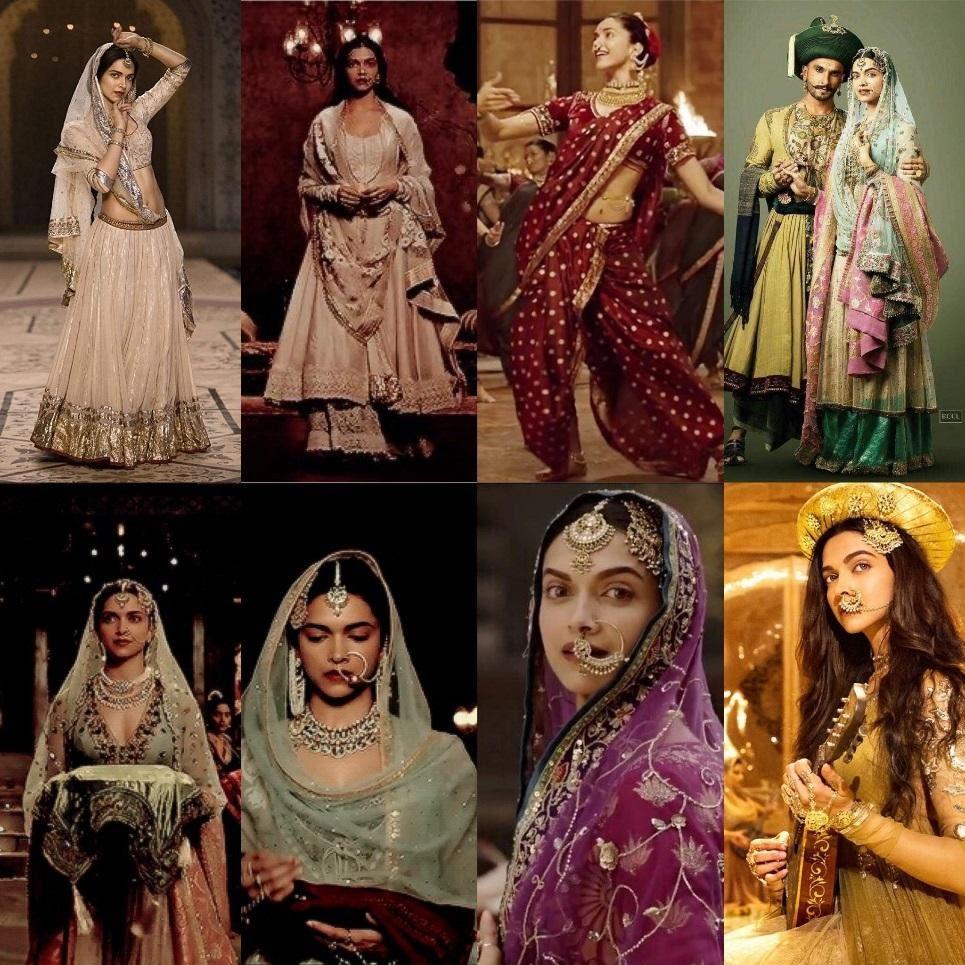 Katrina Kaif, who recently got married to Vicky Kaushal, has given major bridal fashion goals to all the desi dulhans out there with her on-screen looks. For her movie "Baar Baar Dekho", she wore a floral lehenga in the song "Nachde ne Sare" which gave off fun, bohemian bride vibes and made her look exquisite. The movie featured Katrina Kaif in another wedding outfit in the song "Kala Chasma" which saw her donning a classic red bridal attire, accentuated by embellished borders and dreamy, golden patterns. The actress paired the look with a gold maang-tikka, earring and bridal chura. 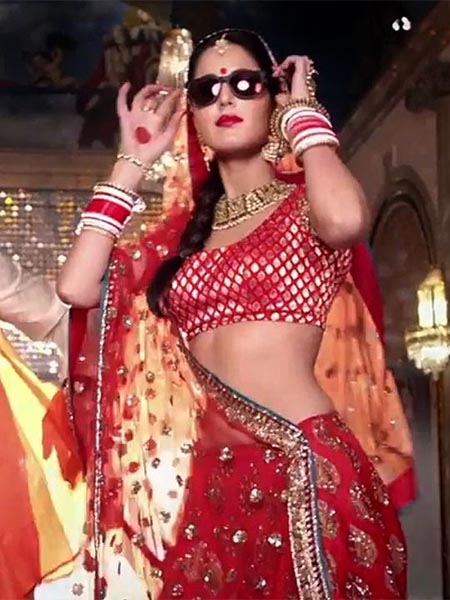 Finally, "Hum Do Humare Do" saw Kriti Sanon in a stunning, dream-like orange lehenga. The look also featured contemporary jewelry pieces along with matching bangles and rings which only enhanced the beautiful on-screen bride. Kriti Sanon looked like a million dollars with minimal makeup and had her Chunni over her head. 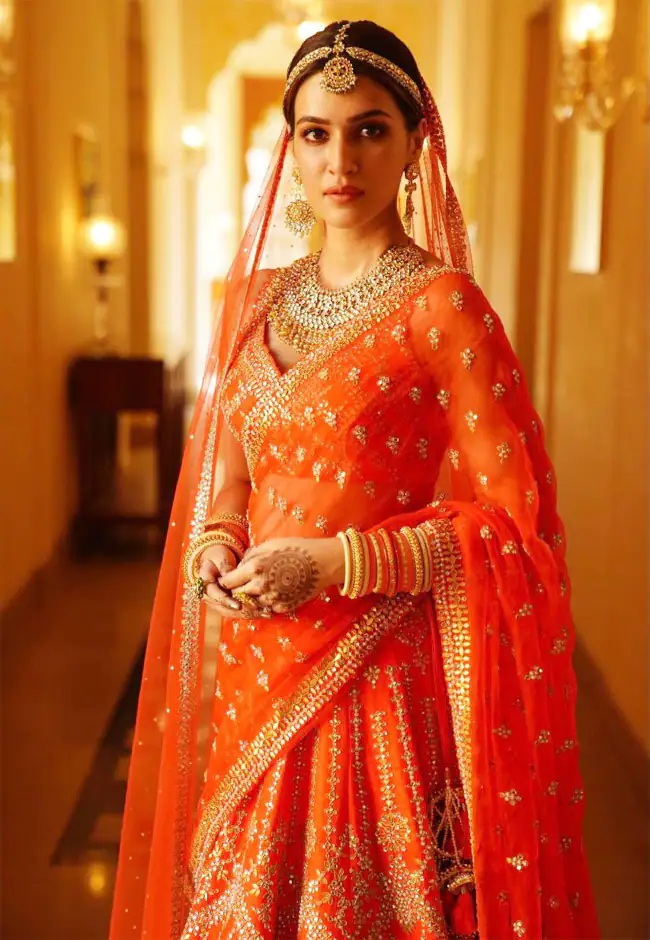 Figure 13. Kriti Sanon in Hum Do Humare Do

Marriages are the essence of India and Indian cinema. Secretly, we've all probably binge-watched certain Bollywood films just because they're such a visual delight. Bridal sequences in Bollywood films have an opulent and regal feel. From the exquisite costume details and new patterns to gorgeous needlework, Bollywood inspires Indian bridal wear with all of its sparkle, glamor, and drama.

We have seen how the tinsel town influences the choices of the Indian bride. But since the outbreak of the COVID pandemic, climate change, and new advancements in technology, there have been a few new trends that the desi bride must know. From preferring minimalism and comfort to breaking gender norms, the Indian bridal scene continues to see refreshing spins that are unique but connected to its traditional roots.

The pandemic has shifted the big, fat Indian wedding to the intimate, personalized affair. What were once grand multi-day events with hundreds of guests have now turned into a more intimate (but still lavish) series of events where the details matter. Minimalism is the new slogan for weddings and it can be seen in the trending uncomplicated themes, clutter-free décor, glass and uncomplicated mandaps, and natural backdrop. Bilen Walga, a lead event designer with luxury decor firm Prashe, mentioned that he has seen minimalistic glass and mirror mandaps, refocusing the attention on flowers or an element of the wedding. If muted grandeur is what your heart desires, Athiya Shetty’s white magnificence,created by Masaba Gupta, minimally adorned Ivory creation is what you need! 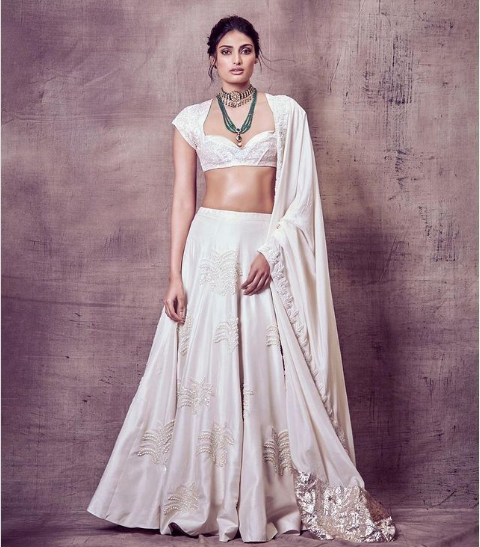 Breaking gender stereotypes is rapidly becoming the new norm and this trend can be seen in Indian weddings as well. From female priests to grooms wearing soft, earlier-known-to-be-feminine shades and gender-neutral wedding outfits, these trends, which are continuing to develop with time, are sure to continue into the coming years. If you are looking to set a few trends yourself, try this pink sherwani with embroidered motifs by Anita Dongre to coordinate with your Desi bride. 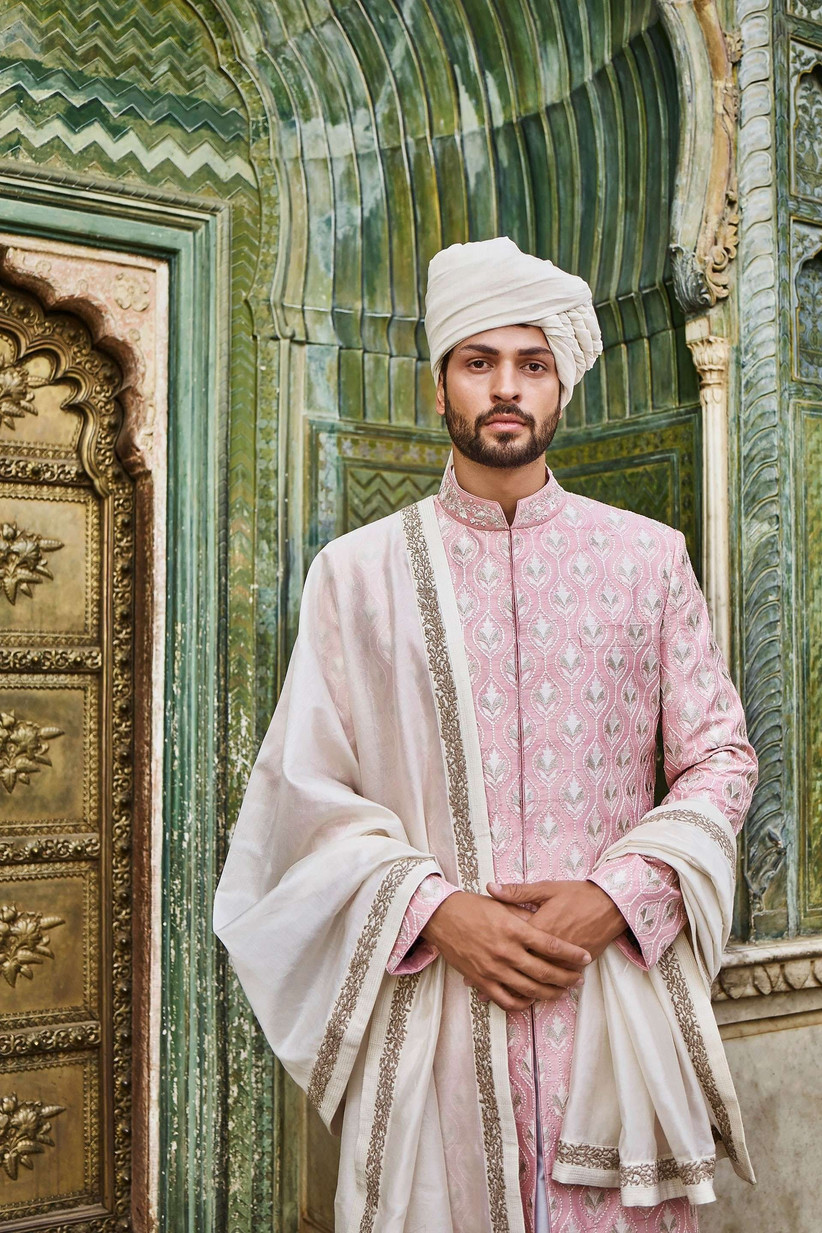 Brides are now ditching heavy and intricate wedding outfits and opting for comfortable, lightweight lehengas and sarees. Although comfort is the buzzword, brides aren’t compromising on the WOW factor. Lighter lehengas that allow them to dance freely, capes and jackets over the hassle of dupattas, and simple embroidery are some of the trends being picked by Indian brides. We’ve even seen brides rock a pair of tennis shoes, so they can truly kill it on the dance floor all night long!

This lightweight chevron motif embroidered lehenga giving off a refreshing ditch-the-dupatta look by Seema Gujral is sure to be a hit among the bridesmaids! Exaggerated sleeves, hybrid silhouettes, fabrics like silk organza, and opulent fabrics, which depict an amalgamation of India and the West, are the latest trends to emerge in the Indian bridal fashion industry. Lace, pearls, and scallops in cholis take center stage along with sweeping, train-like dupattas atop the head. Bridal capes, alternatives to wedding veils, are also something that Indian fashion designers are experimenting with in their bridal collection. This Ridhi Mehra's new-age sari with drapes and ruffle elements, along with a puffed sleeve shirt and an embroidered belt, is a stunning option for modern brides who don't want to go for the traditional “over the counter” lehengas. 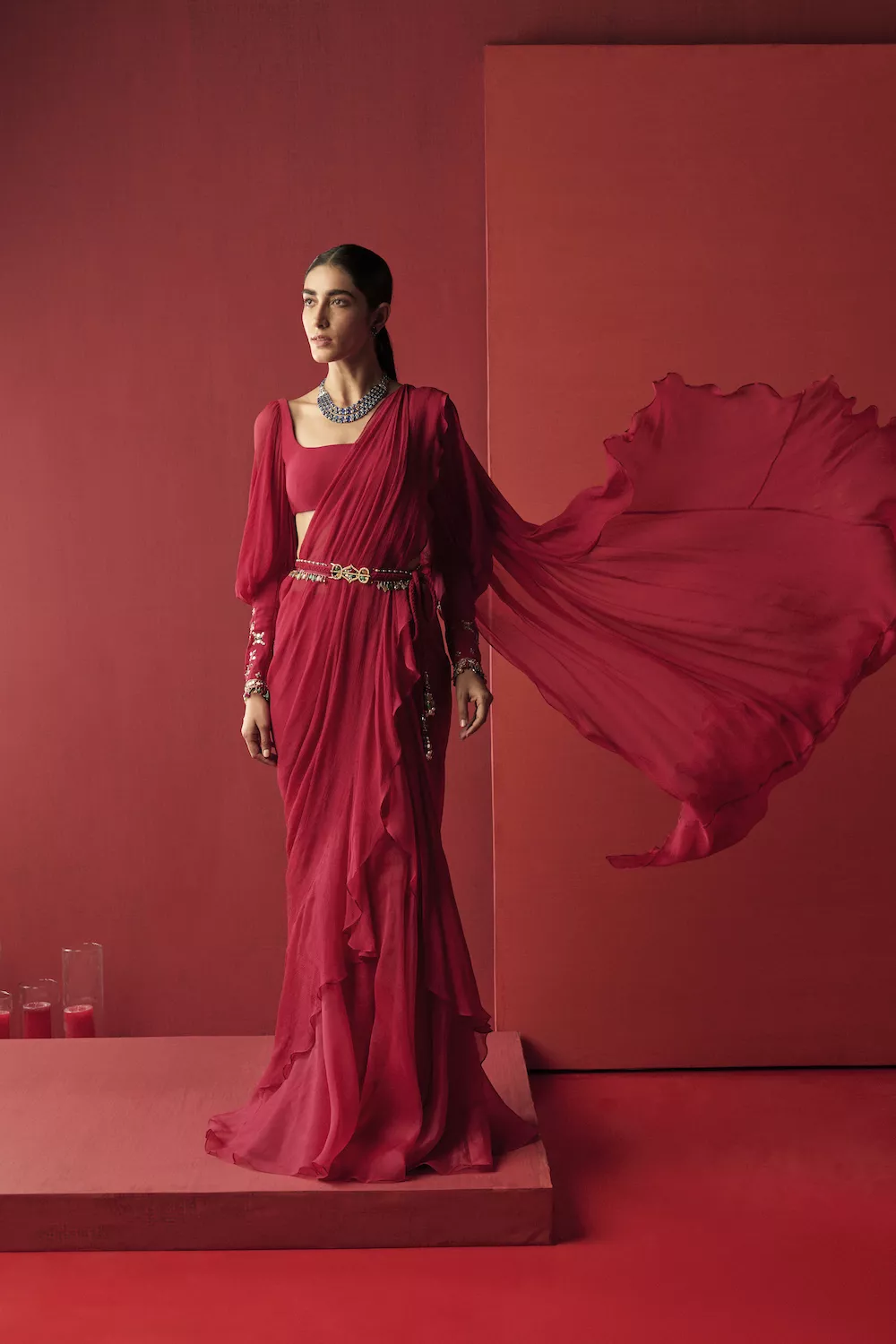 Indian Bridal dresses have evolved in their design and the biggest wedding trends are the Bollywood Inspired wedding ensembles. Let your favorite celebs guide you to look your ethnic best for your big day and take notes from the latest trends featuring in desi weddings to elevate your style game for your wedding.

As we move into this new Covid19 era, if you are one of the many couples planning a smaller Desi wedding, here are some ideas t 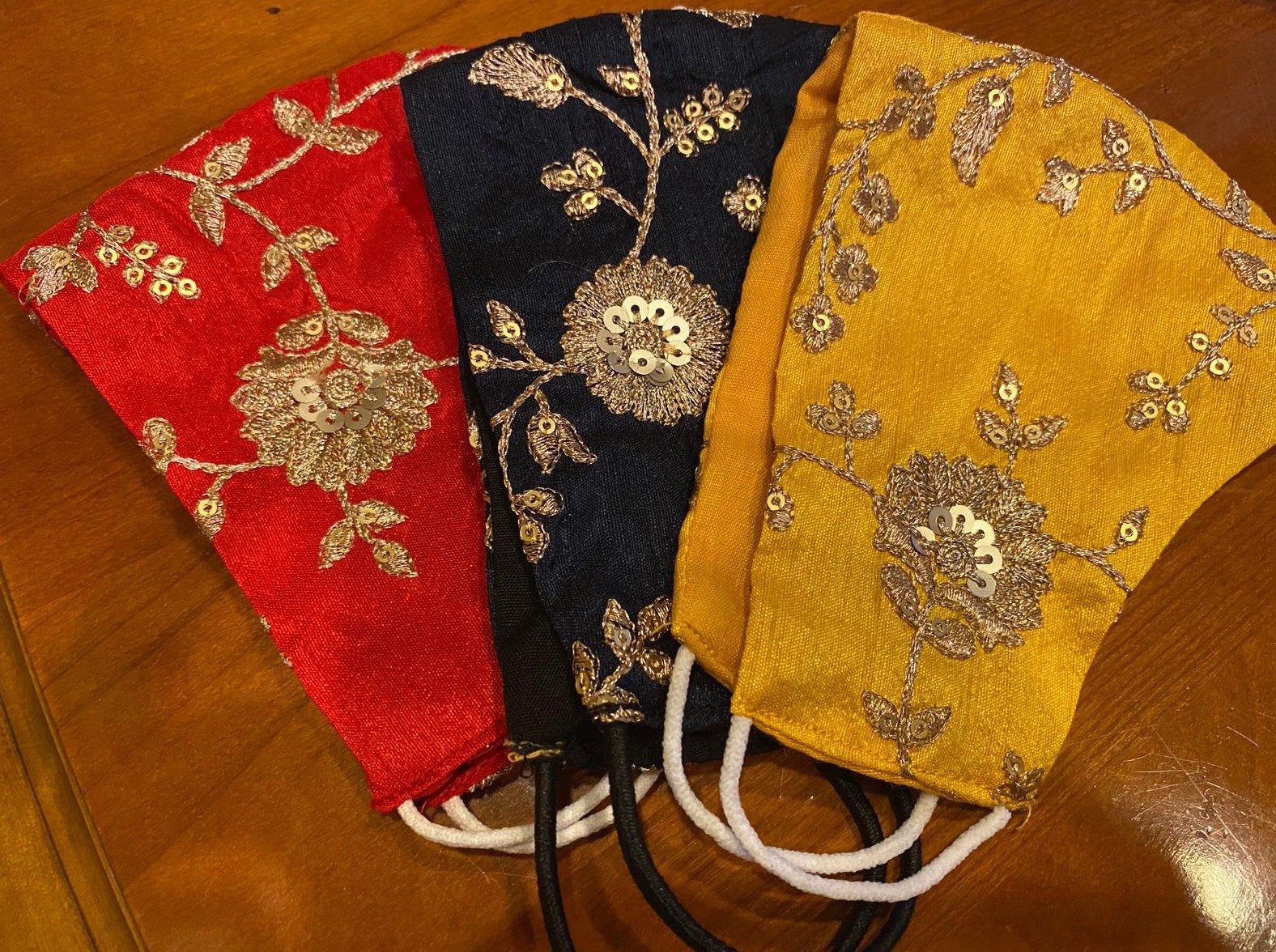 To the couples getting married during this pandemic, masks have quickly evolved to become beautiful, fun and personalized and a 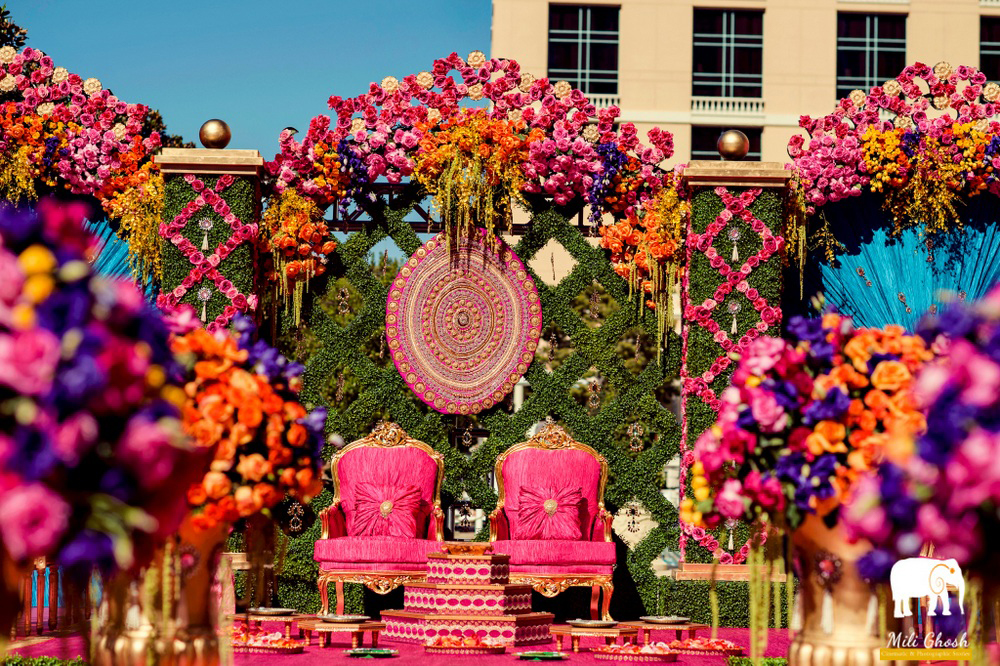 Indian weddings are truly magical - you can transform a basic banquet hall into a Rajasthani mela, a Moroccan-themed affair, a

The Desi Brides of Texas - A Royal Sikh Wedding in Houston

The Desi Brides of Texas - A Royal Sikh Wedding in Houston

Welcome to The Desi Brides Of Texas. Today, we are featuring Priya and Akash’s gorgeous wedding. On October 1st, 2021, Pr